Balancing Business and the Environment

The leader of a sustainable enterprise discusses benefit corporations, the commercialization of green innovations, and the role of business in promoting positive, lasting social and environmental change – both locally and internationally.

Lotus Foods is a certified B Corporation that works to provide customers with premium “heirloom” rice cultivated sustainably on farms across the world. Recognized for their quality and nutritional value, Lotus Foods’ products now routinely appear on supermarket shelves and are rapidly gaining popularity. One of the business’ core innovations builds upon the System of Rice Intensification (SRI), an organic, low-water rice cultivation methodology that increases the efficiency and overall yield of a plot of land. Marketed as the “More Crop Per Drop” program, Lotus Foods’ implementation of SRI enables small farms to double or triple their yields while using 80-90% less seed and 50% less water. The company hopes to popularize these practices on a large scale, and it’s working – from Texas to Bhutan, Lotus Foods’ network of suppliers continues to adopt and reap the benefits of the SRI system, and the company’s efforts have been recognized by the Clinton Global Initiative. Co-founder Ken Lee hopes that the systems promoted by Lotus Foods will not only confer advantages to smaller farms, but will also enable consumers to make smarter culinary, nutritional, and environmental choices.

What is the role of business in promoting positive environmental outcomes?

Promoting anything other than profitability is certainly not a “mainstream” thought for most businesses. As a corporation, your prime directive is to provide shareholder value. But I think that’s part of the reason that the market has evolved [to the point] that we now have things like B Corporations 1, which are established to emphasize social goals in addition to financial ones. It’s still a minority of companies that think [in this] way. It’s a kind of thinking that is based on the premise that you can actually usher in positive change: as B Corps like to say all the time, “be the change that you desire to see.” They follow the assumption that how people conduct their business can actually influence outcomes beyond profit alone.

It’s important that businesses have a CSR (Corporate Social Responsibility) component, because it is in their best interest to have public sentiment on their side. But whether they are truly committed – or whether it’s more like “greenwashing” – there is always another side that demands they still deliver on the economic front. Because they are still liable; they could be sued, if they are perceived to be only focusing on some of the other aspects (like social or environmental benefits).

How has Lotus Foods’ status as a B Corporation impacted the business? Is there value to the official B Corp distinction?

I’d say that – for those who know what [a B Corporation] is, and value it – it’s a big deal. So if people see: “here’s a company committed to these ideals,” and they want to support that company, then that’s meaningful. But I would venture to say that most people don’t even know what a B Corp is… [Because] it’s new, I think that there is potential to raise more awareness about how business can promote real change.

We’ve adopted that position, and we feel like we’ve got something that can drive that type of innovation with SRI (System of Rice Intensification), which we market as the “More Crop Per Drop” program.

Can you elaborate on the More Crop Per Drop program? How did it originate and how does it work?

We didn’t invent the original system. If you search for SRI, you’ll see activities dating way back to the 1970s in Madagascar, when [the system] was discovered by a Jesuit priest and agronomist who was trying to help local farmers increase their yields. He developed a method of growing rice without flooding the fields; by observing a field that had lost its water, he realized that the rice that was not flooded (but was still properly irrigated) was actually doing much better.

We subsequently learned more about it, and made it a cornerstone of Lotus Foods. We chose to move in that direction, encouraging farmers to produce rice more sustainably, incentivizing them with fair trade premiums. But more importantly, we tried to tell the story, so that consumers could become part of the solution. Because what good is it if you’re providing a solution when people don’t perceive that there’s a problem!

Coining the name “More Crop Per Drop” has afforded us the opportunity to have a message that is not mainstream, but one that still resonates with consumers and other businesses.

Do you perceive there to be a substantial difference between a for-profit business and a nonprofit?

I would say that they both play prominent roles in achieving positive outcomes. We collaborate with NGOs and nonprofits, especially with SRI, because we don’t handle the technical assistance with farmers – those services are all provided under the auspices of various [nonprofit] organizations, whether it’s Cornell International Institute of Food, Agriculture, and Development, or groups like Oxfam. These entities treat SRI methods as something that can empower farmers. It’s not just about selling exports to Lotus Foods, but more about [sustainably] growing staple rice grains and getting people back on the land and producing. Any time you can assist farmers – helping them avoid going into debt buying expensive seeds and chemical inputs, providing them with the means to produce enough food – that’s a primary mission.

CMR recently published an article that referenced “Golden Rice,” a proprietary GMO seed technology. What implications does the failure of Golden Rice hold for companies interested in social welfare in developing countries?

One problem with products like Golden Rice is that there’s been nothing that has been developed, in my mind, that traditional heirloom seeds can’t already do. Whether it’s drought resistance, resistance to certain diseases, nutritional properties … there are traditional rice varieties that have already been out in the field, withstanding the test of time, and have the same or better yield than the “high-yield” [licensed] varieties. What is the purpose of those seeds if they can’t consistently outperform those that exist naturally? And because the seeds are proprietary, you can’t just plant crops, save the seeds, and plant again – that’s the basic farming cycle. With proprietary seeds, you have to keep going back each year to buy more.

Another problem is that [Golden Rice] was promoted as a savior for people who are suffering from malnutrition, and it’s built with components to supplement certain [dietary] deficiencies. But from what I’ve heard, the [populations] they’re trying to help don’t eat and enjoy that type of grain. It’s not the type of rice that they’re used to eating, it’s not what they actually want.

What do you envision for the future of Lotus Foods?

It feels like we’re entering another phase of Lotus Foods. Early on, it was just about seeing if there was a demand for heirloom, traditional varieties of rice. It started out with chefs and specialty stores and stuff like that. It really wasn’t until we were introduced to the SRI concept that everything started coming together in terms of “oh - this is the completion of the vision.” Over the last couple years, we’ve experienced rapid growth and secured outside investment, professionalizing the company and building more of a management team. Now the business has a solid foundation, so that as we do scale up, we can move quickly because we have the people and systems in place.

We’ll be working to create markets and onboard all of these farmers who are now being empowered to take control of their own lives, and now have an export outlet where they can receive a fair trade premium. And at the same time, we’re working for consumers, enabling them to make smarter choices, whether from a culinary standpoint, a nutritional standpoint, biodiversity, saving water, food security, food sovereignty – it’s a whole flood of benefits that will accrue if we’re able to scale up and be successful. I get really excited talking about this! 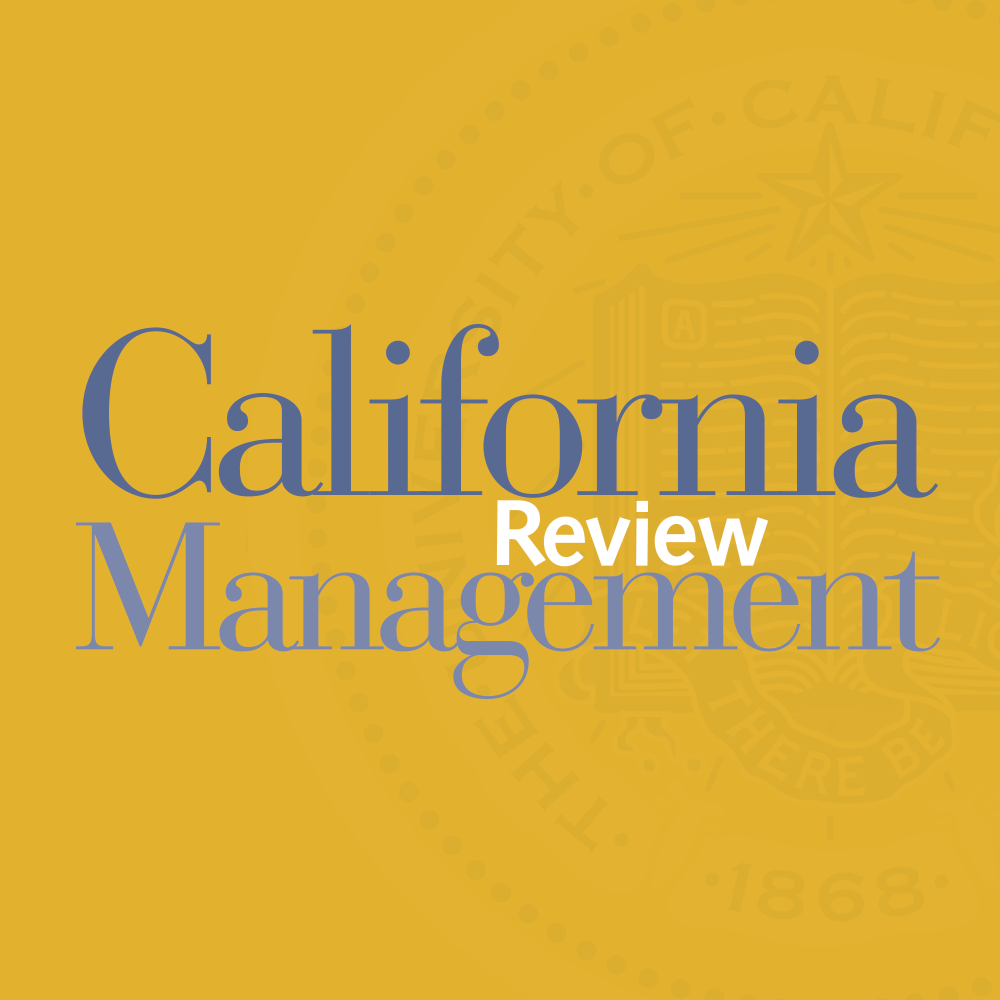 California Management ReviewFollow California Management Review serves as a bridge of communication between those who study management, and those who practice it. We publish leading research that emphasizes practical insights for managers around the world.
« PREVIOUS
Just Do It: Lessons from the Startup Space
NEXT »
Understanding Hybrid Organizations

Enron and the Energy Transition to Renewables

Sustainability is no Longer Enough: How Corporations are Becoming the New Climate Activists

The Climate Imperative for Business