Addressing the sustainability paradox will require both the selfish agent and the moral actor within each us.
Insight | note 30 Sep 2020

Sustainability paradox is a phenomenon where consumers’ (positive) attitudes towards sustainability deviate from their actual behaviors. In other words, most of us value appearing pro-environmental but without “paying” the immediate costs usually associated with sustainable consumption (e.g., the so called sustainability liability). For example, according to National Geographic’s Greendex survey (2014), although concerns about environmental problems have increased in most countries, corresponding consciousness in consumer behavior across many different sectors lags behind. Indeed, market shares of pro-environmental brands are still low and there is recent evidence showing that consumers don’t really consider ethical attributes when they consider competing brands. What can firms and policy-makers do to address the sustainability paradox?

That said, we argue that sustainability initiatives that reflect only the one or other self are less likely to deliver results. As was also the case in our (grocery retailing) empirical context, economists and policy-makers often focus on the primacy of the selfish agent by designing initiatives that exclusively include monetary (dis) incentives (i.e., taxes) disregarding the importance of the moral actor. As we find, what is needed is a synergistic orchestration of activities that address the needs of both the selfish agent and of the moral actor. 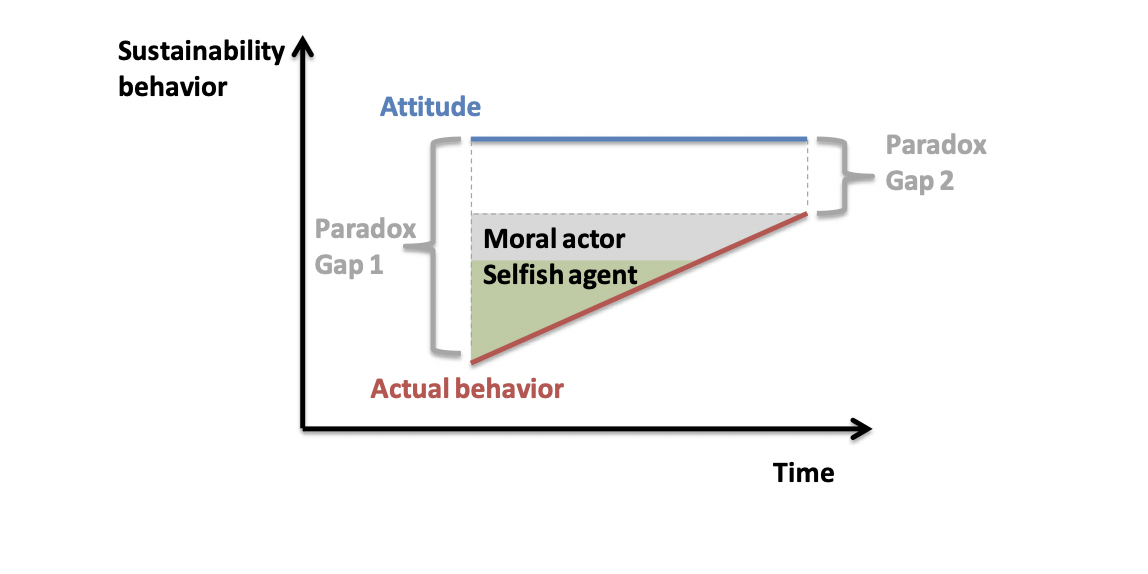 Specifically, in the past two years, institutionally representing the major grocery retailers in Greece (aggregate sales of 8 billion Euros and more than 2,000 stores) and building from an environmental consumption tax that was to be imposed (January, 1st 2018), we created and orchestrated a key sustainability initiative for the industry and country. The key goal was to convince the (skeptical) and largest user of plastic shopping bags in Europe, the Greek consumer (who, however, believed that plastic bags are bad for the environment – 92 percent – and should be banned – 62 percent) to significantly reduce the use of plastic grocery bags only a year later. The national goal was to go from 363 per capita plastics bags yearly —167 of which were used in supermarkets— to no more than 90, the compliance goal set by European Parliament’s Directive 2015/720.

The supermarket initiative centrally featured a synergistic incentive structure. Specifically, while the environmental consumption tax (and several other appeals used in the initiative; e.g., that plastic microparticles are found in the flesh of fish eaten by humans appealed to the selfish actor, the initiative synergistically appealed to the moral actor too in that it strategically made shoppers perceive the use of plastic bags as socially unacceptable practice; a social stigma: using a plastic bag invites social condemnation, something the moral actor in us does not appreciate. Besides the initiative involved an extensive survey with more than 2,000 consumers and consultation meetings with five retailer CEOs, ten CSR and Marketing Directors, and several governmental and environmental Institutions.

The problem of plastic bags pollution

Perhaps the most ubiquitous consumer item in the world, single-use plastic shopping bags, have traditionally been given for free to customers by stores when purchasing goods. Plastic bags are one of the most durable, inexpensive and hygienic way of transporting items. However, although offering great value for money, plastic bags are also a leading source of pollution. In the U.S., American shoppers use an estimated 102 billion plastic shopping bags each year — more than 500 per consumer (Rolling Stone, 2011).

Governments all over the world have taken action to ban the sale of lightweight bags, charge customers for lightweight bags and/or generate taxes from the stores that sell them. As of 1 February 2019, such bans have been introduced in 55 countries, with varying degrees of enforcement, and 31 countries instead impose a charge per bag. In our empirical setting, the Greek state has imposed a 0.04 Euros green tax per bag since 1 January 2018, which increased to 0,09 Euros since 1 January 2019.

The supermarket industry quickly realized that this tax would significantly affect grocery shopping behavior, representing a risk that could inflict very negative sentiment from consumers who were still coping with six years of recession and a Greek State notoriously slow in implementing European directives. In this context, for example, consumers might start accusing the supermarket industry for ulterior motives underlying the tax (i.e., lobbying in favor of a tax that would allow cutting costs) or requesting from the industry to absorb the requisite consumer costs.

The supermarket industry proactively and jointly designed an action plan to respond to this risk. The action plan and the resultant initiatives were collectively designed and ran by ten major Greek Retailers and orchestrated by a not-for-profit institution that represents the research arm of the industry. Five (competing) retailer CEOs and ten Marketing Directors had to get out of their comfort zones and collectively create a plan that will result in educating shoppers about the nature of the problem, the legislation itself, and alternatives to single-use plastic bags. Critically, however, these experienced in shopper psychology CEOs and directors, understood that if the plan was to be successful it should also centrally invest in appeals that recruit the moral actor. This intuition was supported by the literature namely the selfish agent-moral actor model that we introduced to the executives. As an example, the team decided that the messages on the re-usable bags to be introduced as alternatives to single-use plastic bags (i.e., objects that shoppers naturally conspicuously use), represented an opportunity for recruiting the moral actor: the re-usable bags had to be branded and signed in such a way that would enable the moral actor to signal to others that s/he is against single-use plastic bags (Variations of plastic pollution data followed by the slogan “Think before you take a single-use plastic bag today. Use a reusable shopping bag instead.”)

This effort was successful in that: (a) single-use plastic bags in supermarkets were reduced by 80 percent, from 167 to 33 per capita, contributing towards the national goal (i.e., 90 per capita yearly) significantly more than the industry’s fair share of contribution (i.e., 42 per capita yearly) and, (b) there was an 12-fold increase in reusable shopping bags in supermarkets with important implications for environmental protection.

On the other hand, no explicit effort to recruit the moral actor was made by the powerful associations of other retailing outlets (i.e., bakers, grocery stores, butchers, fish shops, pharmacies, food delivery service) or the Greek State, other than any spillover effect from the supermarket initiative (e.g., small outlet owners unofficially used informative material they received as customers by the supermarkets in their own stores). These other retailing outlets (which collective represent circa 8 billion Euros of turnover), use more than 2 billion plastic bags per year, contributing about half of the overall plastics bags consumption in the country (i.e., 120 bags per capita yearly). Results in these other outlets although important (highlighting the primacy of the selfish agent) did not contribute as much as expected towards reaching the European directive cut-off. As a result, the government decided to double the tax in 2019. To the very least, these channels’ fair share contribution towards the achievement of the national goal should have been no more than 33 per capita yearly. However, a survey (engaging over 2,000 shoppers) specifically designed to investigate shoppers’ attitudes and behaviors towards single-use plastic bags after the introduction of the environmental tax, across several grocery sales points, shows that these channels contributed at least 60 per capita. On the aggregate, at the end of 2018 the average use of single-use plastic bags was estimated to be about 120 (higher than the goal of 90 plastic bags per capita per year). The government decided to double the tax in an effort to get below the national (and European) goal.

Interestingly, it seems that this synergistic incentive structure offered to the supermarket industry an unexpected key benefit, essentially turning the sustainability paradox and taxation risk into an opportunity. Our annual consumer survey, based on a sample of 2,000 consumers, shows that the pro-environmental reputation of the Greek supermarket industry increased from 53 percent in the end of 2017 (when the tax was imposed) to 73 percent in 2018. In other words, the comparatively worst performing reputational element of the supermarket industry became its best scoring feature, surpassing the positive impact of the industry on employment and economy (Figure 2). This reputational gain is even more important in the context of an industry internationally considered very “dirty”(e.g., refrigeration alone is for some analysts a much bigger environmental problem compared to that of plastic bags). This is one more piece of evidence for the benefits of strategically pursuing sustainability appeals that synergistically satisfy the selfish agent and the moral actor. 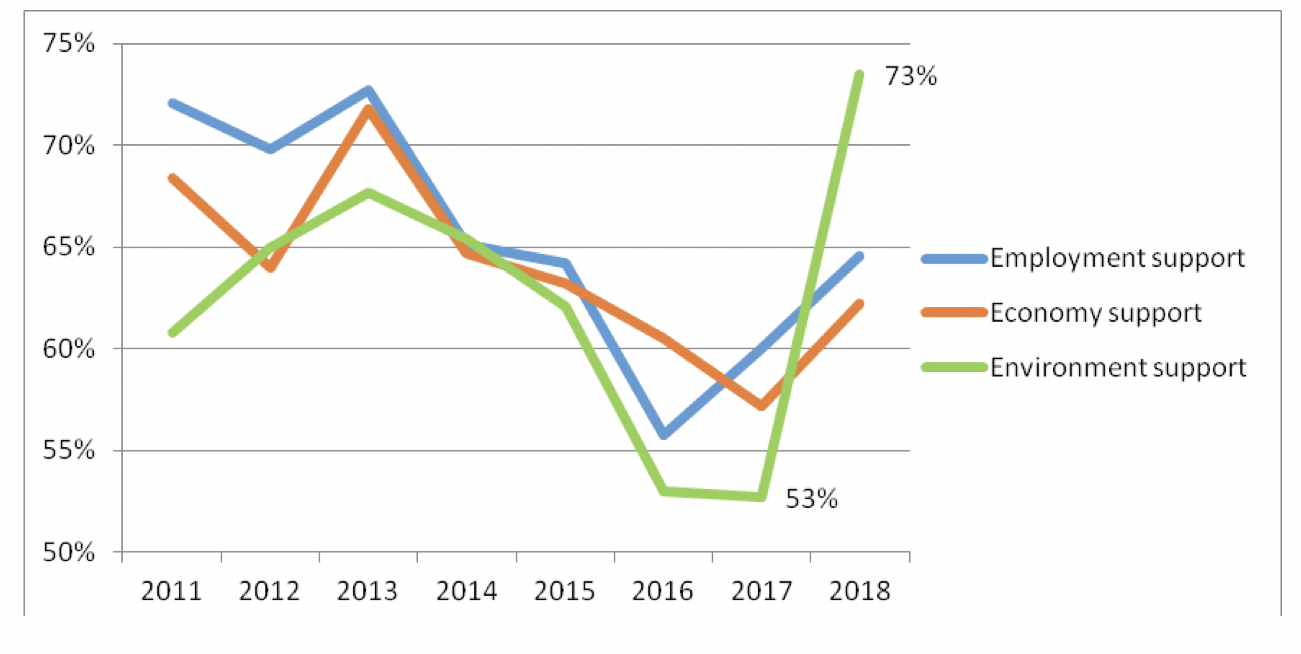 Here’s some of what we learned along the way that we hope will help organizations design sustainability initiatives that will drive more sustainable consumer behavior: 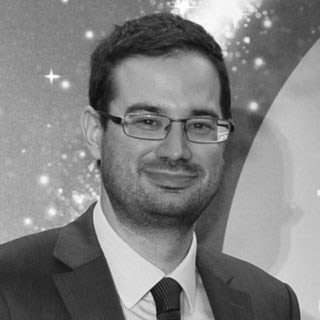 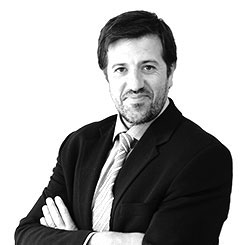 Pavlos VlachosFollow Pavlos A. Vlachos is Associate Professor of Marketing at ALBA Graduate Business School, The American College of Greece [with Tenure] and also serves as a Member (temporary) of the Graduate Faculty of The University of Alabama. 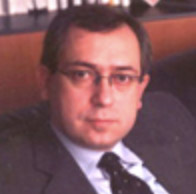 Adam Vrechopoulos Adam Vrechopoulos is an Associate Professor in the Department of Management Science & Technology at Athens University of Economics and Business.
« PREVIOUS
Cultural Resilience and the Italian Response to the Global Health Pandemic
NEXT »
Tap Your Knowledge Wisely

Technology for Social Impact: Taking Stock of the Field, What is Working, and What is Not

Empower Your Employees Through the Pandemic With These 4 Ts