by Shawn Pope and Patricia Bromley 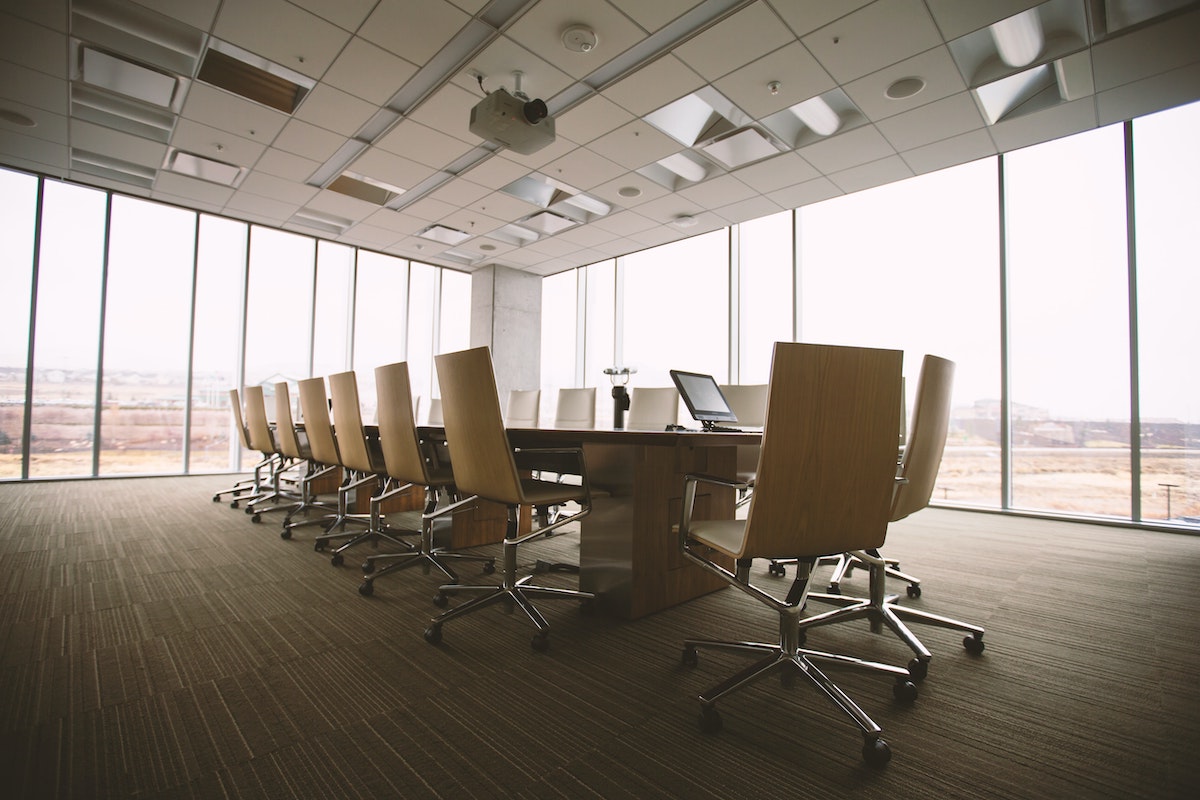 Has the Business Roundtable’s “Statement on the Purpose of a Corporation” resulted in increased Corporate Social Responsibility?
Insight | frontier 19 Sep 2022   PDF

It’s been over three years since 181 CEOs of America’s largest firms signed the Business Roundtable’s “Statement on the Purpose of a Corporation” — a formal declaration that companies have core social responsibilities beyond shareholder primacy.


At its publication, the statement was effusively covered by major news outlets as both a potential breakthrough moment in the evolution of corporate social responsibility (CSR) — and as the subject of intense skepticism.

The roundtable is, after all, a lobbyist. It has a history of pushing laws to reduce corporate taxes, roll back regulations, and weaken labor unions. Given this history, shortly after the statement’s release, many observers reasonably asked if the Statement was just empty rhetoric.

To address this question, we examined whether the Roundtable and its members have become more socially responsible since the Statement’s release. We summarize our findings below, in advance of five recommendations to the Roundtable for making its commitment to CSR more credible.

Since the Statement’s release, a very welcome development is that Roundtable members have made additional public commitments to CSR principles. In particular, in the year after the Statement, the Global Compact saw the largest one-year number of new members from statement signatories in the past two decades (see Figure 1 below). As background, the Global Compact is a United Nations’ initiative that requires its participants to espouse 10 internationally recognized principles on human rights, labor, the environment, and anti-corruption.

This is a positive development: Research suggests that the Global Compact can improve its members’ CSR, not least because it has “local networks,” country-based associations through which members learn from each other how to implement the compact’s principles into their own business contexts. 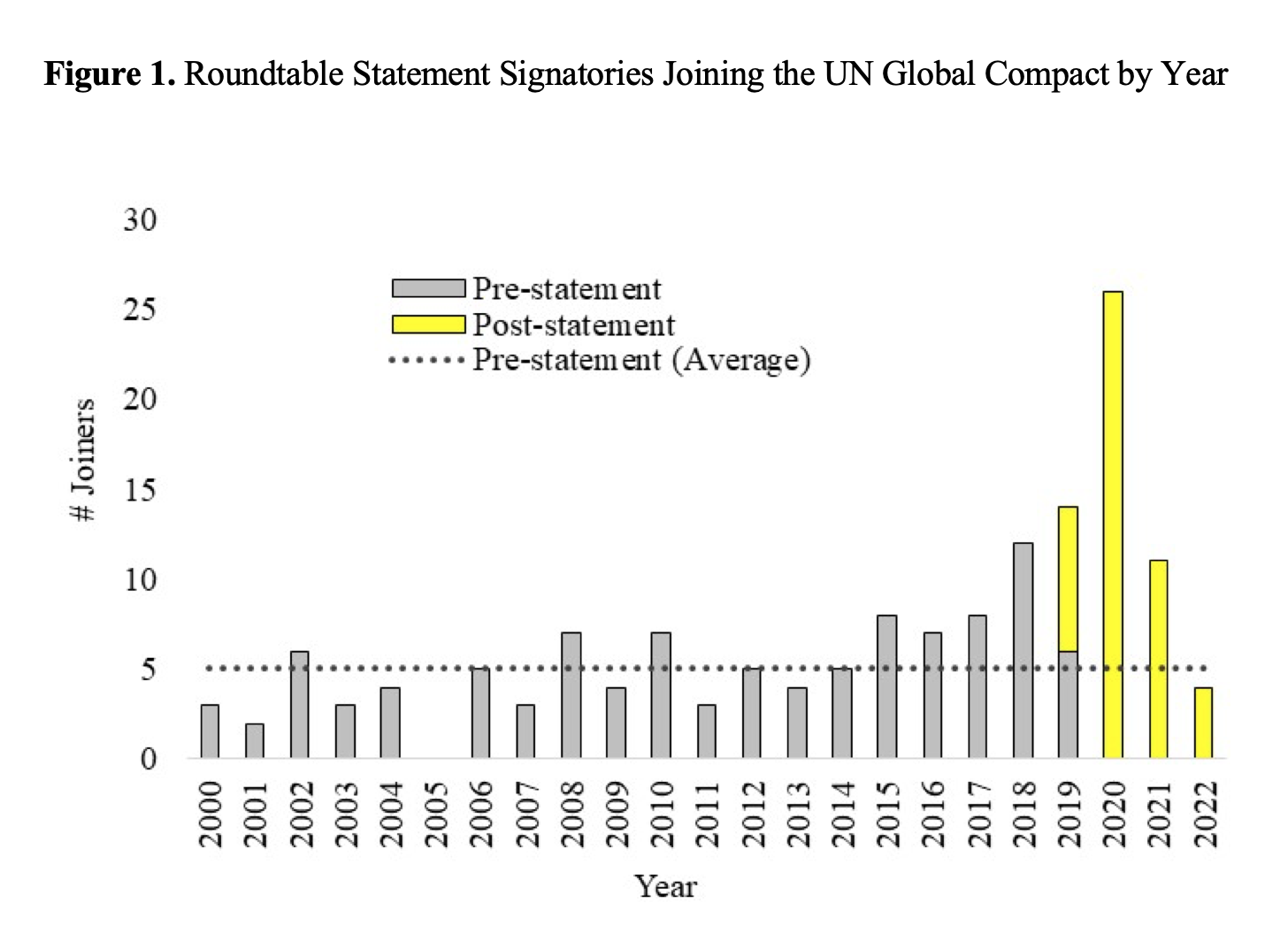 Notes: The sample is the original 181 statement signatories (the statement archived on the Roundtable’s website is continually updated with new signatories). Figures for 2022 are as of June 21, 2021. Global Compact membership is available here.

While Roundtable members are increasingly espousing CSR, their actual practices do not appear to have improved much. This is apparent from an analysis of the CSR scores of S&P Global. These scores are good benchmarks for present purposes because they are updated annually, publicly available for most signatories (73%), and highly granular (ranging from 0 to 100). They reflect almost 1,000 data points in the areas of environmental, social, and governance performance, gathered from public filings and responses to direct company questionnaires.

Based on these scores, Figure 2 shows three patterns. First, Statement signatories have had better CSR over the past five years than non-signatories in the S&P 500. Second, however, since the Statement’s release, signatories have not made noticeable improvements to their CSR relative to the S&P 500. Third, the quality of the Roundtable’s recruitment in recent years has deteriorated, as evidenced by Figure 2’s red line, which represents the 79 current Roundtable members that were not original signatories. This decline in the collective social performance of Roundtable members, due to lower-quality recruitment, weakens the credibility of the Roundtable to speak on social issues on behalf of its members. 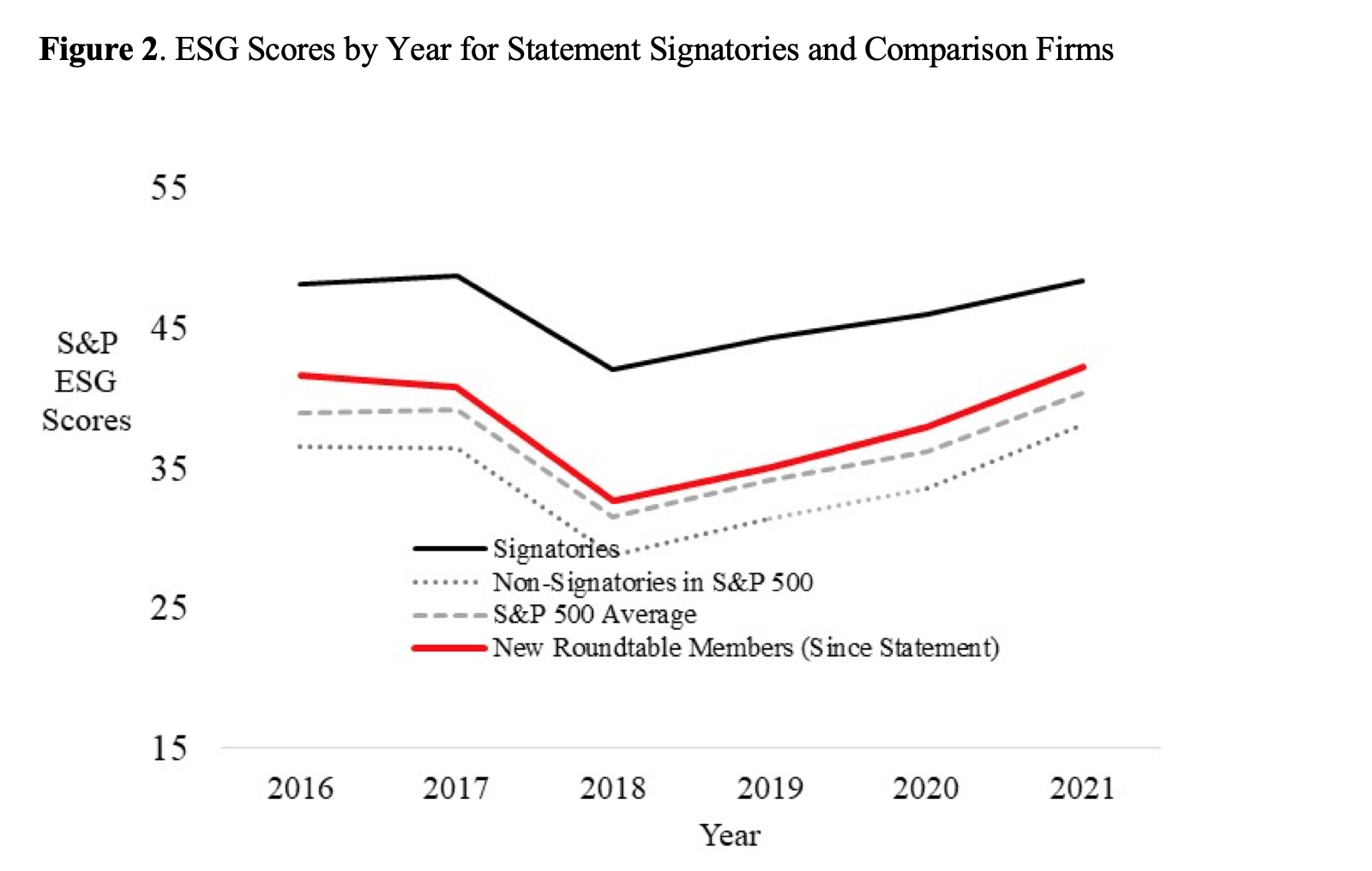 Nonetheless, the Roundtable Is Speaking Up More Often About CSR

Looking at the Roundtable itself rather than its members, the organization has also stepped up its promotion of CSR in recent years. This is apparent from the changing content of the Roundtable’s press releases (see Figure 3 below).

Traditionally, these releases addressed economic issues, such as trade and labor laws. Since the statement, they have come to deal with many social issues, from climate change to racial justice, voting rights, and gun control. One press release, for example, spoke out against the recent spate of hate crimes targeting Asian Americans and Pacific Islanders.

This new disposition of the Roundtable, even if meant to be symbolic, can be a catalyst for positive change. Studies show that public support can be a form of “moral entrapment,” providing external groups with the leverage to hold organizations to a logic of consistency. What results over time has been called the “paradox of empty promises.”

Moreover, in addition to advocating for CSR in its press releases, the Roundtable has begun engaging with its members on the issue, for example, by conducting an internal survey on their CSR practices and publishing the results on the 2-year anniversary of the statement. As another example, the Roundtable has also recently announced a partnership with the Thurgood Marshall College Fund to increase investments in Historically Black Colleges and Universities. 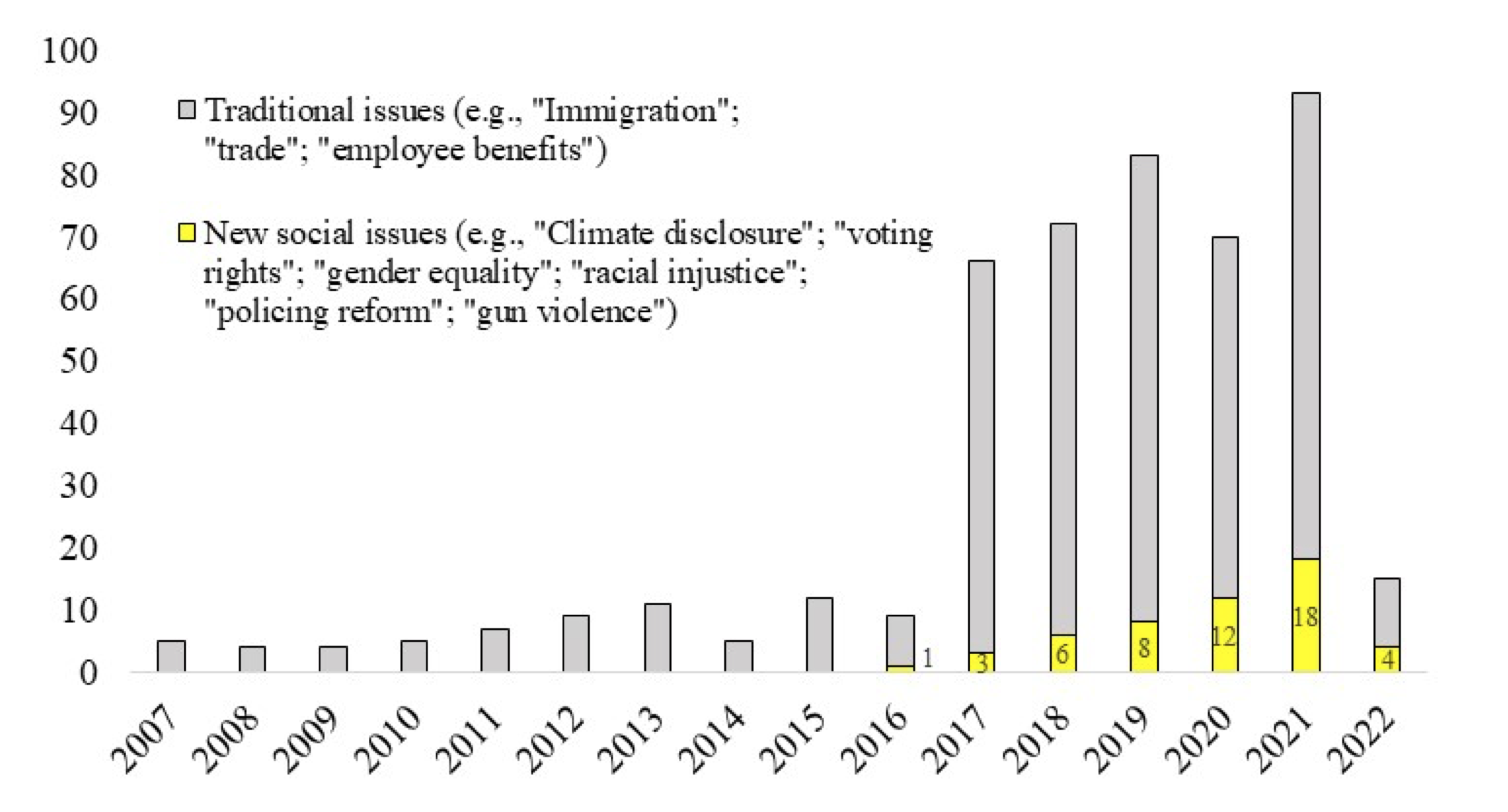 What the Roundtable Should Do Next

Overall, the evidence above is mixed. One the one hand, the Statement has led to greater public commitments to CSR, both among its signatories and from the Roundtable itself. On the other hand, there is no indication that the Statement has improved companies’ actual practices.

Below, to encourage the Business Roundtable live up to its public commitments, we offer five recommendations, based on our own research as well as emerging trends and best practices in the CSR field.

1)    Set Membership Criteria. It is undoubtedly jarring to many observers that the Roundtable statement has been signed by firms that have been heavily criticized for their CSR practices (e.g., Amazon’s warehouse conditions), that are barred from CSR indices by the nature of their work (e.g., Raytheon, a bombs manufacturer, cannot be in the Dow Jones Sustainability Index), and that are in the process of being removed from CSR portfolios (e.g. BP, a fossil fuel company, can no longer receive investments from Harvard’s endowment). In addition, our findings above showed that new Roundtable members have had lower CSR scores than the statement’s original signatories. As a representative body, the Roundtable’s CSR support is only as credible as its members’ practices. To improve this credibility, the Roundtable should create socially minded criteria by which companies can gain and maintain their Roundtable membership.

2)    Integrate CSR into Governance. To allay the criticism that its support for CSR is empty rhetoric, the Roundtable should integrate CSR in a structural manner into its governance. This will ensure that CSR is stitched into the administration of the organization, rather than a superficial overlay. A promising approach, according to recent research, is to establish a CSR board committee. Additionally, the board might be expanded with representatives of American workers, as they have been seriously impacted by the policies that the Roundtable has supported, e.g., free-trade agreements that result in the offshoring of American jobs to countries with weaker labor and environmental protections.

3)    Increase Transparency. CSR is a voluntary, decentralized movement whose lifeblood is the accurate and timely flow of information to the media, NGOs, rating agencies, academics, and other stakeholders. In the current case, OECD research is clear that the public wants greater lobbying transparency. More specifically, the Roundtable could follow hundreds of other nongovernmental organizations worldwide in producing an annual CSR report through the Global Reporting Initiative. Standardized CSR reporting, including disclosures about the Roundtable’s lobbying activities, would enable external groups to ensure that the Roundtable’s practices compare favorably to other lobbying organizations domestically and around the world. Relatedly, the Roundtable should spur its members to be leaders in developments like the International Financial Reporting Standards’ new climate standards – a comparable and audited metric proposed for public companies at the recent COP26 meetings.

4)    Devise Participatory Structures. Our research suggests that, for business associations to be successful in promoting CSR, they must involve their members in meaningful interaction around CSR themes, such as environmentalisms, sustainable development, and human diversity. In one study that we conducted, the World Economic Forum, which holds an annual conference centered on CSR issues, has been able to increase participants’ CSR engagement even outside of the conference. The Roundtable should also look for opportunities to bring its members together in thematic colloquia.

5)    Create Virtuous Competition. One way that the Roundtable can promote social change is by leveraging the need of firms to stand out from their peers to achieve competitive differentiation. More specifically, the Roundtable could follow other CSR initiatives that have given recognition to their members for excellent social performance. For example, the Global Compact has showered publicity upon a select list of companies that especially embody its principles (i.e., “The Global Compact 100”). Likewise, the Carbon Disclosure Project has created a similar list for companies whose sustainability reporting is especially commendable (i.e., “The Leadership Index”). The Roundtable could take the same approach, for example, by giving an annual reward to a handful of companies whose social practices are deemed to be innovative or exemplary.

In our research into the Roundtable’s recent record on CSR, we uncovered some promising developments as well as some significant areas for improvement. Although we believe that the Roundtable’s and its members’ public support for CSR can be a powerful catalyst for change, we call on the Roundtable to make this support more demonstrable, for example, through better recruitment, measurable changes in the quality of members’ CSR practices, commitments to standardized CSR reporting, and public guidelines that condition Roundtable membership. 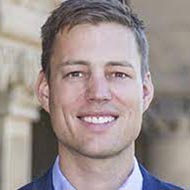 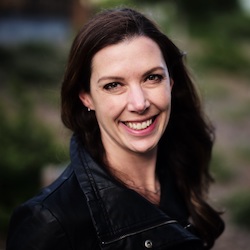 Patricia Bromley Patricia Bromley is Associate Professor in Stanford’s Graduate School of Education and the Doerr School of Sustainability, Co-Director of Stanford’s Center on Philanthropy and Civil Society, and Director of the Scandinavian Consortium for Organizational Research at Stanford.  She studies social and cultural globalization, nonprofit organizations and civil society, civic education, and sustainable development.
« PREVIOUS
Two in the Lead: The Importance of Relationships When There are Two Bosses
NEXT »
The Customer Service Mindset that Creates Successful Change